A Congressman’s daring scheme to have his younger wife murdered is nearly foiled when she makes a sudden change of plans and decides to visit her mother in Maine. Here is Screen Critix Review of writer-director Seth Kozak and Damian Veilleux’s noir-style thriller, Rendezvous.

When bad weather and icy road conditions mean she has to postpone her journey, a congressman’s wife finds an old hotel and decides to book in and take refuge. As different meetings and incidents occur during her stay, the feelings persist that the very same instinct that pushed her towards safety may now have betrayed her. As her paranoia grows she begins to suspect that the inn’s only other resident is a man who has been hired to kill her.

Seth Kozak and Damian Veilleux’s ‘Rendezvous’ wears its noir heart on its sleeve and as a film, it is all the better for it. The movie has been shot with a lot of style, some of it self-conscious, but that is the point of it. One of the pleasures in a film noir-like this is enjoying the brooding lighting, the camera’s low-angle, and tilt shots as well as the stock characters that we are all familiar with drawing attention to themselves and everything on the screen.

Kozak’s shot choices declare themselves as being part of a movie while the characters are noir archetypes the majority of whom have dubious intentions. The movie does something interesting with its timing, too. At 15 minutes it is an average timed short film but as the suspense increases, it begins to feel more mysterious. Characters think they know what has happened then they turn out to be wrong. The audience thinks they know what is going on and then they also turn out to be wrong.

My favourite character was scheming congressman Zachary Wright played with quiet intensity by Mike Sutton. Sutton is about as good as anyone can be at playing a greedy, ambitious and cold-hearted politician. When he appears on the screen there’s an extra charge to the film, because we know everything his character says and does will be deceitful and self-interested. He isn’t used enough but he is the key component of the plot. He only shares one short but nice early scene with his wife Catalina, Katrina Morhacova in ‘Rendezvous’, but throughout this entire scene, dislike hangs in the air. There’s nothing overt it’s simply a way Wright has of pronouncing his words as if he wants to say all the proper things even though he doesn’t actually mean them.

Morhacova herself is also impressive as the wife, she plays both the damsel in distress and femme fatale roles and successfully manages the transition from one extreme to the other in the 15 minutes run time. 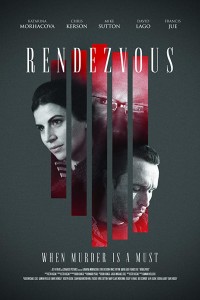 Classic film noir specialized in bad luck and ironic turns of fate. A crime would be committed without a problem, then the criminal would be trapped by something simple, something they missed, an unrelated detail. But that’s not what happens here, what we discover is that crime is due to be committed, the tension rises as we wait for that crime to happen and then just when we think it is about to happen the whole thing is flipped onto its head and sent in the opposite direction.

The music of the film is encompassed by one track that plays throughout which is a cover version of Kate Bush’s Running Up That Hill by the grunge/punk band Placebo and despite my misgivings on first hearing it does actually fit the material.

The cinematography is bold with the aforementioned use of low shots and tilted angles giving us a sense of confusion. The lighting as with all noirs is suitably dark and moody and the performances are strong.

We are given no real answers with Rendezvous but what we are given is a well-made film noir and a certain sense that not everything is as it should be or as obvious as it seems.

The Voice Within (2019) short film review