After losing a patient, a junior doctor’s night only gets worse as his guilt and tiredness effect his mind in the short film Do No Harm.

Witnessing someone die can be an unforgettable moment for anyone, but for people who work in the medical profession, and seeing people take their last breath on a daily basis must have a serious lasting effect. I’m not speaking from experience, but it must be difficult to switch off once home if you are a doctor or a nurse.

In Sam Blakeney-Edwards new short film Do No Harm, we get to see the effects of losing a patient on an overworked and tired junior doctor called Dr. Bloom (played by Oliver Rednall). Distraught at being unable to save the life of a young woman, through no fault of his own, Bloom begins to hallucinate with visions of the dead, flashing blue lights and shadowy people.

Blakeney-Edwards does a fantastic job with this thirteen-minute film. It looks professional throughout, especially with his stellar editing work (alongside Sean Siegfried) and in Aaron Medway’s cinematography. It’s easy to tell that both the director and the cinematographer worked hard in making sure that the short film looked as good as it possibly could. The use of camera angles and movement is superbly done and very impressive. Medway had no issue from jumping from the hectic and sterile rooms of a busy hospital to exterior night shots, to the almost nightmarish hallucinations. The shots never got boring, which is admittedly difficult to do. 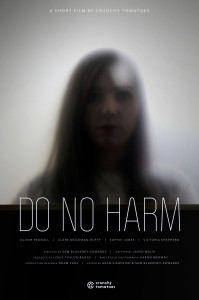 The score, which is provided by Totul, works very well with the narrative and kind of reminded me of Trent Reznor and Atticus Ross, which is a massive compliment.

Javid Malik provided the screenplay for Do No Harm, and if his IMDB page is up to date, it seems that it may have been his first actual produced work, which is astounding seeing that the story and dialogue work so well.

Do No Harm is about to be set upon the festivals and I’m sure it will be well received everywhere it is shown. It’s an impressive piece of work.