A group of thieves for hire break into a laboratory and get a whole lot more than they originally planned in Patrick Ryder’s Red Sky. Review after the jump.

Coming in at just under 60 minutes, Red Sky consists of parts one and two of a planned trilogy, with the final instalment ready to start shooting in January 2014. Director Patrick Ryder, who also made The Ice Field, now brings us a science fiction thriller with additional horror elements.

The main plot revolves around a group of thieves who have been hired to break into a laboratory and steal the contents of safe. It should be an easy job for such professionals, but things soon go horribly wrong. A strange noise is the catalyst for the group to separate and while two members are searching the dark and scary looking warehouse, one member is watching a video on a camcorder of a doctor explaining what has happened to his test patients.

Needless to say, the building is actually overrun with the undead, leaving the four criminals fighting for their lives.

Red Sky is a strange breed of short film with both positives and negatives in equal measure. The initial cinematography is excellent – rain dripping from overflowing gutters, cars racing by under street lamps – it looks great. It soon changes when the film gets going though, as some camera angles don’t suit the mood and some of the shots (especially in the dark warehouse) aren’t lit up greatly and the film suffers from a lot of noise. We would normally advise in purchasing some noise reduction software, but seeing as the whole film was made for just £450 (a brilliant achievement), we can only say that they need to use more light next time and then reduce in post. 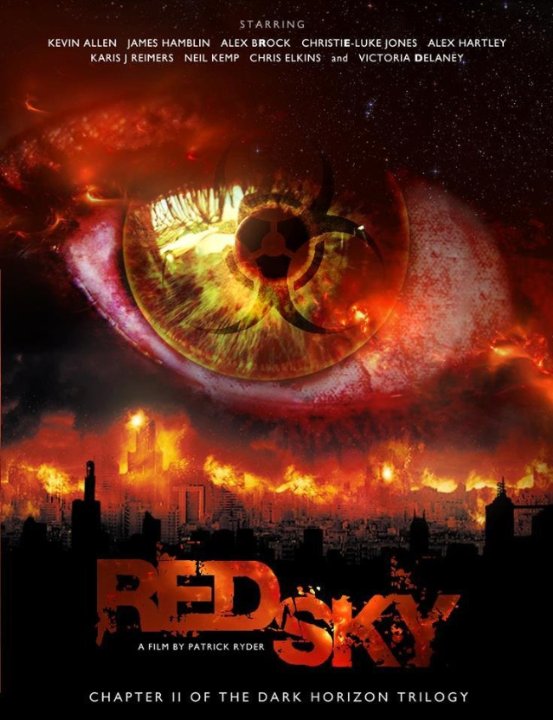 Some of the special effects are brilliantly done (on such a low budget they need to be applauded) and the make-up of the infected is also great. Ryder does a great job with building up tension in the film; my favourite scene has to be where two of the thieves are looking for one of their dead comrades when suddenly a song can be heard coming over a radio – echoing down the corridors of the warehouse. We know something is coming, it’s just a matter of which and when.

One of the main problems with Red Sky is the majority of acting. On only £450 (yes, I’m mentioning the budget again, but that is good going) we weren’t expecting to see Daniel Day Lewis-esque talent, but many of the people in the film are pretty poor. It’s a catch-22 situation though, the bigger the budget the better talent you can attract. It feels as though Ryder has called in some favours with some of his friends. Don’t get me wrong though, some of the people in the film are very capable, but all that does is makes the vast difference in talent obvious to observe.

Without spoiling the film, Red Sky finished on a cliffhanger and it makes us want to see how this tale ends. We also wish that Ryder was given some money to make this trilogy of short films as, with a bigger budget (and we are not talking 10’s of thousands) it could have made a huge difference.

Red Sky has some great moments where we can slightly see brilliance trying to come through, yet it is let down with some poor acting and the small usage of light.