A mishmash of puppets, pixels, stop motion and live action stock footage, Austrian director Johannes Grenzfurthner gives us an insight into his mind and ideology with this cinematic revue about politics.

Mad as a box of frogs but thoroughly entertaining, we learn about freedom, privacy, identity, resistance, the markets, capitalism and the political left and right.

Sometimes in life, you can get the timing just right, there is no fortune telling involved or any strategy employed, you just end up in the right place at the right time. With the current political scandal involving Cambridge Analytics and Facebook, it seems director Johannes Grenzfurthner has struck gold with his timely documentary, Glossary Of Broken Dreams that he managed to make for just $10k.

For those unaware, or have recently been in a coma, the Cambridge Analytical scandal involved mining the details of Facebook users by using personality tests that went viral. This meant that the company had at its disposal the political bias, thoughts, needs, likes, and dislikes of every person who took the test and even their friends who didn’t. This ran into tens of millions of Facebook profiles and this data was used by political parties to target individuals with adverts that may or may not influence their voting intention.

Grenzfurthner himself is our guide through this political minefield, giving us his notes like an angry chorus from the ancient Greek and Shakespearean plays. His film is an unmethodical survey of a gargantuan topic, one that has only grown more so since he began to work on the project. But it doesn’t matter as he forges ahead, using a pick and mix structure that jumps all over the place.

As we follow him on his journey to explain political terms we may not be up to speed with, we are treated to the sights of his friends, puppets, pixels, stop-motion animation, and live-action stock footage, helping us to understand what the hell is going on in the world. He even finds a place for the old Wilhelm Scream to appear too.

The problem for Grenzfurthner is that the terms he often deals with are mainly to do with people’s beliefs and feelings as opposed to anything factual, of course, the backgrounds behind each term are factual but the way in which these terms are accepted or not by the audience depends on the individual’s own ideology. If you agree with them you will accept them, if you don’t agree with them then you simply won’t and will shout ‘Fake News’. 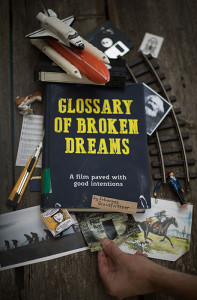 Sadly, what social media has allowed us all to do is befriend, chat, listen, follow and like, people and things that we agree with. These days we all live within our own echo chambers and even a flashingly edited documentary is unable to help change our minds. Unfortunately, the art of debate is getting scarcer, extinct even – inevitably becoming the giant panda of our time.

Capitalism is another term that Grenzfurthner tries to break down for us and it is here where we can compare him favorably to Oscar winner Michael Moore. That said where Grenzfurthner surpasses Moore is in his ability to remain balanced no matter how manic his film becomes. We all know Moore has his views and is completely open about his left-leaning, liberal tendencies, Grenzfurthner, on the other hand, remains firmly on the centre ground.

So left or right you can feel pretty good about this film because while there is a whiff of anti-capitalism to the movie, at the same time it doesn’t attack it vigorously and still gives us the choice to continue participating in the feeding frenzy of capitalism if we so wish.

The movie strikes a nice balance between personal views and actual facts for which the director deserves much credit, however, he also seems to want to convey too much information in too short a time also, so perhaps he deserves a little criticism there as well. There is hope in this film but there is also a call to arms and Grenzfurthner’s impatience with the status quo is laid bare throughout the full 97 minute runtime.

The final 10 minutes of the movie talks all about social media and how it’s influence can be used on specific political and business aspects all over the world. How this information can be mined to target everyone, everywhere with whatever you want it to have, thanks to the Cambridge Analytical scandal, become public. So whether or not you are worried about a political consultancy firm admitting to using “behavior change,” “military influence campaigns,” “psychographic segmentation,” and other euphemisms to mess with our minds. A film dissecting political terminology made by a madcap Austrian director could be just the comfort blanket, we are all in desperate need of.